Sharon O has boycotted her motherly duties since she left the Big Brother Amplified House about two months ago. It has emerged that this beauty is always engaged with many deals which are as a result of the fame that she got courtesy of featuring in the Big Brother Africa House.

Sadly, her duties of taking care of baby Lisbon have crossed to hubby Ronnie Mulindwa who doubles as the Obsessions boss. It is not clear how he is juggling between changing diapers and managing the group.

Sharon is right now in Nigeria where she has teamed up with Vina in search for gigs. Meanwhile, Latest info coming in indicates that Sharon O has got herself a deal to air her own Reality Show. Watch this space! 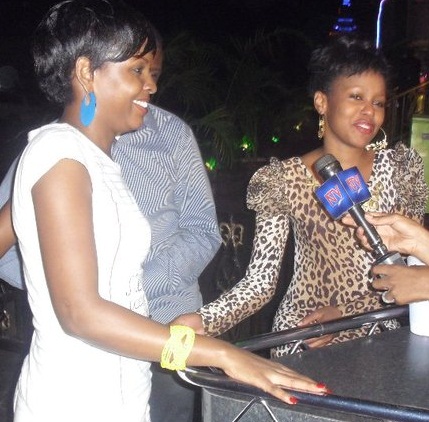 Sharon Salmon Nalukenge is back in the country after having spent 91 days in the Big Brother Amplified house in South Africa. Sharon was picked from the airport by her family and close friends together with Multichoice officials.

The group then proceeded to the VIP section of Ange Noir, Guvnor where she mingled with fans. Philbert Okure and Hannington Kuteesa attended but surprisingly Ernest Wasake did not attend the home coming party of the Big Brother finalist.

Sharon O came fifth with in the just concluded Big Brother Amplified where she got US$ 10,000 as a finalist. Aware of her new fame tagged to the Obsessions group, Sharon is already attending to those who are interested in booking her for any gigs. 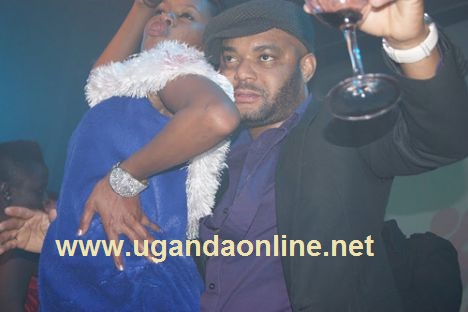 Uganda's representative in the just concluded Big brother Amplified was under pressure to give in to the housemate from Mozambique but Africa threw him out of the house very fast. The two met after the show and this time there with no cameras.

Sharon is now in the country busy taking care of Lisbon and Ronnie. 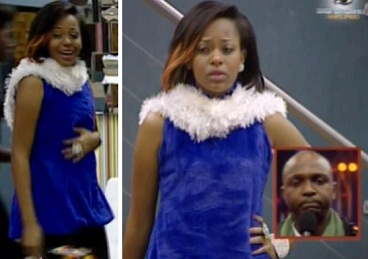 Having survived four possible evictions most especially the last one in which five housemates were up for eviction and only two went back to the house is one of the reasons Sharon feels she is a threat.

You do not blame her for thinking like that. We have had strong housemates like Ghana's Alex who had not been up before and the only time he was up for eviction, he never came back to the house.

Michael from Mozambique, Confidence from Ghana, Ernest from Uganda were equally strong housemates but because of the way the Biggie decides like the case of two houses which is not the case now and how Africa decides can either throw you out or keep you in for whatever reason.

She was telling Millicent and Karen how strong she is no wonder that is why she has been up four times but still managed to survive but these two just told her not to be arrogant. It should be recalled that in the last eviction, Karen and Sharon survived though Karen was a head of Sharon by a cool 5 votes and how I wish she knew this, those will be the last words coming from her. Yesterday was eviction night and Sharon had been up for eviction but out of the five who were up for eviction, only two survived of which Sharon was one of them and the other was Karen.

On Monday, housemates were busy nominating each other and in the end Nigeria's Vina, Bernadina from Namibia, Mumba from Ghana Zeus and Lomwe got the highest votes in terms of nominations.

Mumba was not on that list but she got herself there when the current Head of House, Vimbai saved Wendall and replaced him with Zambia's Mumba. Karen's move of not swapping with anyone has again paid off because many thought that since Vimbai and Karen have not been on good terms after Karen massaged Wendall's back, she could use this as a pay back, besides in the previous weeks, Vimbai could always nominate Karen.

Sharon has equally survived this one so this means that she is still in the game for at least two weeks bearing in mind that the game still has only three weeks to go. 13 Housemates have so far left the house and 13 are still in the house.

This coming Sunday, one of these housemates Vina, Bernadina, Mumba, Zeus and Lomwe will be going home.. So start saving your favourite housemate.

Sharon O has shocked all Big Brother Africa fans by surviving this eviction in which she was up against very strong housemates but managed to download all of them with at least 3 votes except for Karen from Nigeria who had 8 votes.

Last week five housemates were up for eviction and three of them starting with Miss P, Alex and Weza in that order left the house on the Sunday night live show.  Miss P and Alex got 1 vote each as Weza got 2 votes. The show kicked off with Ice Prince doing his 'Superstar' track.

The head of house was called out to reveal to the other housemates what her decision was and when it turned out that she had left the nominations as they were minus saving her self, all the housemates were shocked by the move.

Miss P was the first one to be called out of the Big Brother house sending Kim (Zambia) to more tears. On stage, she said, "It was awesome for having left the house" Weza, Sharon, Mumba and Luclay were the housemates who nominated her.

IK swung into action and called out Alex, Sharon O and told them to stand up. Sharon your safe, IK roared as she made the cross sign and thanked Africa once again and broke down to tears of joy.

As 'player' Alex made his way to the Big Brother stage, Ice Prince bounced back with his popular hit 'Oleku'. Alex was so casually dressed for he did not think it was just about time for him to pack his bags for the next plane to Ghana. On responding to IK's question of what actually went wrong, he said he had been blown by the Jerry Springer show.

Alex was nominated by our Sharon who said that she was aware Alex had not been up and wanted to see how Africa feels about him. The others who nominated him were Hanni, Millicent and Vimbai.

IK switched to the house again calling Karen and Weza. He immediately shot at Weza and saved Karen. The housemate from Nigeria broke down but you can imagine to what extent she could have cried had it turned out that one of the switched housemates had been evicted.

At the time of filing this report, the Jangu track was playing with Vina, Karen, Bernadina and Hanni joining Sharon O.
Related: Sharon Obsessions is Up for Eviction Sharon broke down again on Friday evening like she does every time she is up for eviction. Weza, Millicent Kim and Mumba gave her all the support to at least stop her from crying and look at things from a more positive approach.

Mumba from Zambia told her that by the time she came to the Big Brother Africa house she only knew Radio and Weasel from Uganda but now she knows Obsessions and everytime she hears the 'Jangu' song that is an added advantage.

Millicent from Kenya told her that the rate at which the Obsessions song has been played, one may think Big Brother is hitting at you. You've even marketed Jackie, we do not know her in this house, when I heard Jangu, it was a hit and now it is a hit *3.

Weza told her that she does not need to google her because she now knows all that information and the girls told her that nobody in the house has got airtime like Sharon, so even if she left on Sunday, It can only get better from out than getting worse for her, so she should instead be proud of all that.

The gals added that actually some housemates are artistes but their songs have not been played at all and if they have been played, it is not at the rate at which 'Jangu ' has been played.

After all those positive messages, of looks, brains and swagg as told by the gals, Sharon had stopped crying but was still broken.