Tanzania and Nigeria Have Won Before
Wednesday, May 04 2011 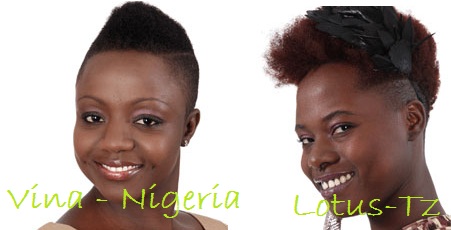 Housemates from Nigeria and Tanzania in focus: - Vina Longpet is a radio presenter from Lagos where as Lotus Kyamba is TV presenter from Tanzania. Both countries have had the chance to win the Big Brother prize.

Nigeria has even taken the top prize twice through Kevin (BBA4) and Uti (Big Brother Revolution). Since inception, it was only Big Brother One that was won by Cherise Makubale and since then, we have not seen a female housemate win the game.

Richard Dyle Bezuidenhout from Tanzania won the Big Brother Africa 2 and this was one of the most interesting group of all times. Now with that brief background, the two countries have had a chance taking the prize money home and the two housemates Vina and Lotus among others are using their hair styles as a strategy to convince Africa, but I highly doubt if Africa will buy that.

Unemployed Karen from Nigeria is the other housemate representing Nigeria while Bhoke a TV presenter in Dar-es-Salaam. The two countries have been lucky to have another set of representatives in the Big Brother Amplified house but Karen still has to convince Nigerians in particular and Africa at large that she can even go beyond the first three evictions.

On day one, she tried to walk with a boob swagg to the jacuzzi clearly displaying her boob floral tattoo, but I doubt this is enough to save her because judging from the messages on the screens, some indicate she is doing badly.

Finally, Bhoke from Tanzania as compared to Lotus will certainly give some mileage to Tanzania if we are to go by her beauty and character. She is one bold babe who by day two she had already checked out our Ernest(Uganda) fully clad in his 'adams suit' as he showered.

The two countries have female housemates representing them which points to our earlier observation of Big Brother being won by a female way back in 2003. We are yet to see if this is a move by Biggie to have a female take this season's prize.