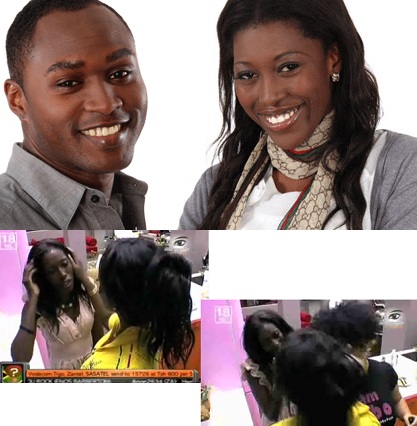 In our Kenya and Ghana Locked in First Amplified Kiss, it marked the beginning of love chemistry brewing among housemates as Millicent and Alex kissed. Vimbai on the other hand has feelings for Alex and confessed to Confidence after the party that she has a crush on Alex.

"I just think he is indecisive but I think by tonight he will be decisive, don't loose hope on him" Confidence said to her. Remember the housemates had just had a party and were all high as many like Lotus(Tz) had already blacked out.

Time to Sleep
Confidence suggested that tonight all beds be joined to form one jumbo bed so that if there was any reason to mingle, then the game would flow easily and indeed no time was wasted.

Zeus was a bit tired but continued seeping on his glass as Miss P or Peo gave him company as she gently caressed his chest. Alex was sleeping on his bed taking white wine as Bhoke and Vimbai were seated right on his bed.

Bhoke was in a very short pink dress and by now she had started dancing provocatively as Alex enjoyed the show. She later sat with open legs facing Alex. Bhoke left to pick something from her bed. This is the moment Vimbai went under Alex's duvet.

Bhoke came back and also joined Zeus in his bed though he had kind of slept off. This left Ernest(Ug) very disturbed as he was the only one not paired. It disturbed him for several minutes and Confidence noticed so she invited him in her bed.

Ernest did not waste any time, rushed to under Confidence's duvet and straight on started touching. Confidence roared. No you can't do this. She even removed the duvet clearly exposing Ernest's hand that was trying to make it's way under her jean.

The Game
By now the lights were off and we were operating under infrared view which allows night vision similar to what Team Six used to grab Bin Laden. Vimbai was in her short dress that could easily go up, asked Alex to help her remove her bra, which he did and mild movements commenced.

Aware of the night vision, Vimbai put her left arm around her shoulder to confuse Africa but our censors were in full alert by now. She used her right arm to guide Alex's dongle to access her USB port as the mild movements in the sheets were becoming uncontrollable.

Biggie must be a multipartist, it is at this point that he took us to Nic and Wendall who discussing over something we could not follow at that time. Biggie later brought back the cameras to the romping couple with Alex who was shouting Kumayaaaa as hecontinued surfing Vimbai.