Six Up for Eviction as Ugandans Survive
Monday, May 09 2011 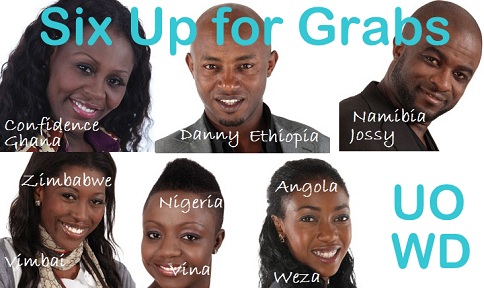 Ugandan housemates Sharon and Ernest in the Big Brother Amplified are still in the game at least for two weeks after they survived the first nomination. Zeus from Botswana who is also the current head of house was also up for eviction but as HoH, he was able to replace himself with Zimbabwe's Vimbai.

The other housemates who are up for eviction are Confidence from Ghana who by the way is disturbed by this move, Danny from Ethiopia, Jossy from Namibia, Vina from Nigeria and Weza from Angola.

This makes a total of six housemates up for eviction and at least two or more could be leaving the house next Sunday at least to reduce on the congestion in the Heads/Tails houses.

Meanwhile, The 'Heads' have heard Big Brother's loud voice addressing the The 'Tails' so as far as they are concerned, it is official that there is another house. Zeus and Lomwe have confirmed that on separate occasions they had Biggie's voice from the kitchen and bathroom calling out one of the housemates to the chat room.

To vote in Uganda: SMS Vote + the Housemates name to 6626 - UTL, Warid and the cost of an SMS is Shs1000. Go for your phone and start voting for Ernest and Sharon O.