Millicent, Felicia were on Wendall's Case Last Night
Tuesday, May 10 2011 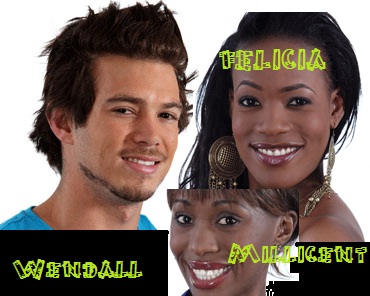 Last Night is a night you will remind Wendall about even after three years and will tell you that he can't forget such a night. It was about time for Biggie to switch off the lights for the housemates to sleep after having gone through the nominations stress when all this happened

It is not clear if Malawi's Felicia and Kenya's Millicent were killing stress but at least it left Zimbabwe's Wendall disturbed in the knees. Before we go into details of this, it should be noted that there is extra view on Big Brother which allows you to view a different picture from what is showing on Channel 198 directly but then again from the same house.

Simply click OK on your remote and you will be redirected to another screen dubbed BBAA Extra.

This is where you can get those scenes which in most cases might not be suitable to watch while with the little ones like shower hour (We were able to view Bhoke looking at Ernest showering through the extra view), modem, USB connectors etc.

Wendall was in his bed as Felicia and Millicent were about to tear themselves on who should sleep with Wendall that night. They even gave Wendall a chance to make a choice between the girls and all he did was just to smile and holding tight to his pillow.

Felicia was in shorts as Millicent had a black panty under her night gown that she constantly exposed to Wendall to grab his attention. Millicent at one point developed ideas of even putting their beds together now that they are sleeping next to each other.

Millicent kept on arguing with Felicia as to who was better suited to sleep with him. The Kenyan housemate actually went right on top of Wendall and asked him who he was interested in and the pilot from Zimbabwe was only smiling back.

Millicent was the babe who kissed with Ghana's Alex and was in a tight race with Vimbai for Alex's love but Biggie comes up with plans always and this time around created another house which left them in the Heads house as Alex crossed to the Tails house.

Our online snoops logged off from here as the girls were still debating on who should hit the ice first but at least this is an area to watch over the next days, we will keep you posted.