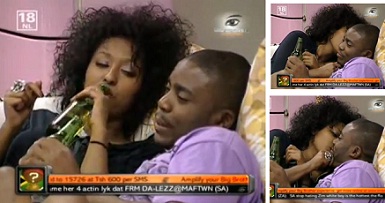 Reality TV is real because what you see is what you get and that is exactly what is happening on Channel 198 for DSTV subscribers. The brushing, the showering, the eating, who blacks out after one glass of Amarula has been on since the first day of this month and now down to it's fourteenth day out of 91 days.

We now bring you the couples which have already hooked up or likely to hook up in the house and probably end up in a wedding of sorts because it is now on official Kevin(Nigeria) and Liz (Tanzania) are married.

Lomwe and Hanni - These are already in advanced stages.

Nic and Kim - The housemate from Kenya is planning for 'Lobola' and Kim told him it's about USD 5,000. They now sleep together

Luclay and Nkuli - These two South African housemates have turned to each other and things are heating up every other day. Initially we thought they were discussing matters to do with their country but it has now turned to the individuals and any minute from now they are about to explore the inner personalities.

Michael and Sharon - The housemate from Mozambique is on Sharon's case though back at home, Ronnie Mulindwa is still very positive Sharon cannot 'do it.'

Bhoke and Ernest - The Tanzanian girl and the Ugandan dude Ernest Wasake are definitely an item. The chemistry is becoming irresistible by the day.