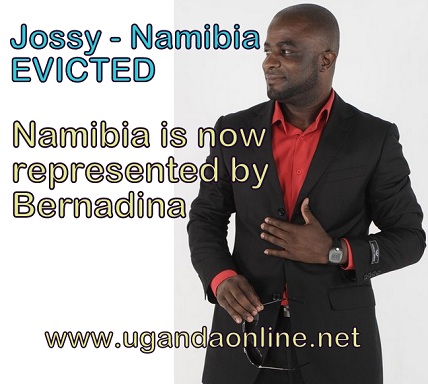 The first housemate to be evicted from the Big Brother Amplified was Jossy Joss from Namibia who scored the least votes out of the six housemates who were up for eviction.

The Nambian housemate entered the Big Brother game by accident but his leaving has surely not been accidental now that he hates cleaning and has been quiet for the last two weeks.

During the live show, IK started off by asking Confidence if they had resolved their differences with Vimbai and the Big sister said yes and all that is now history.

The six housemates who were up for eviction, four were female housemates(Confidence, Vina, Weza, Vimbai) and they indeed impressed Africa so Biggie asked them back to the house while Danny(Ethiopia) and Jossy Joss were the last two standing.

This is Biggie's game and so he makes the rules. Danny got more votes than Jossy Joss, so he was sent to the Tails house where Lotus was more than happy to receive him. She jumped on him with legs wide open and moments later unleashed a glass of wine for Danny who was still in shock after surviving the axe and only to join housemates he had spent a week without seeing.

The four housemates who bounced back to the main house were all in shock with tears rolling down their cheeks as they could not believe they had just survived. Vimbai and Zeus hugged though it was written over Vimbai that Zeus had a case to answer for having swapped himself with the 24 year old who had the guts to attack a 37 year old.

Meanwhile, for those who recall as he walked into the house with a swagga will be surprised to learn that he was the first housemate to leave. In fact he is appearing on these pages for the first time unfortunately when he is even leaving the house.

Bernadina is now the only housemate left from Namibia joining countries like Mozambique and Angola which have one housemate each.