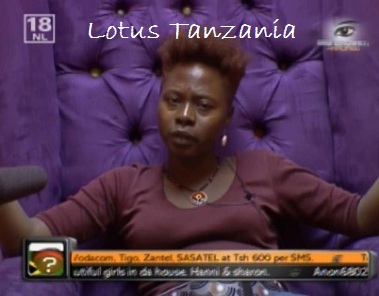 Tanzania has two female housemates in the Big Brother Amplified and one of them is Bhoke who is best of friends with Uganda's Ernest and the other is Lotus who can be best described as the housemate with a pin in her nose.

Lotus was on Friday afternoon disqualified from continuing with the show after she slapped Luclay from South Africa who is up for eviction with three other female housemates.

The announcement was made two hours after biggest fight of the season so far. Biggie said: "The Big Brother House Rules state very clearly that: "Any Housemate who becomes physically  violent will be removed from  the House immediately.
"In addition, the Rules also make it very clear that:

Housemates will be disqualified by Big Brother if they  have broken any of the rules or undermined  the world of Big Brother. In this event they cannot return  and may be replaced."

The two housemates were involved in a quarrel which later turned physical. Biggie disqualified Lotus and asked her to pack her bags immediately while Luclay was assigned the duty of washing dishes and cleaning the house for as long as he is in the house.

Luclay was involved in another fight with Karen from Nigeria though for this particular fight she lost and opted on crying. Lotus will be the second Big Brother contestant to be disqualified after Hannington Kutesa from Uganda who was disqualified last year for beating up Lerato from South Africa.

Tanzania now joins Angola, Mozambique and Namibia which have one housemate each. Meanwhile, Lotus had voted for her fellow countrymate Bhoke to be evicted because she wanted to be the only Tanzanian in the game