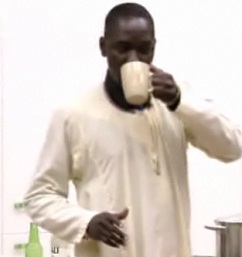 The Big Brother Amplified reality TV show kicked off 35 days back and since then only four housemates had left the house starting with Jossy Joss, Michael, Nkuli plus Lotus who was disqualified.

On all the eviction shows, it was one candidate leaving the show and if it turned out that two housemates had to leave the Heads house, then the second last housemate crosses over to the Tails house. Bernadina and Danny have benefited from this move.

Last week it was Sharon O who was up against four others and she emerged the second best even after being very quiet. It is now not clear if the dull housemates will stay in the house as the strong ones are evicted. Michael from  Mozambique was strong and so was Ernest but it's not clear whether Africa has changed the way they vote or Biggie now looks at it from another angle.

It is as though Biggie knew Ernest was coming back. Moze Radio, Weasel Doug  together with Keko performed, The Amplified Crew danced to 'Talk n Talk' a track by the Goodlyfe Crew making it more or less a Ugandan night on top of Grace Nakimera's music that played.

Meanwhile, there is a way the game is tending to Luclay's side something that is not going down well with some countries. The house now has 20 housemates after five have been evicted and one disqualified.