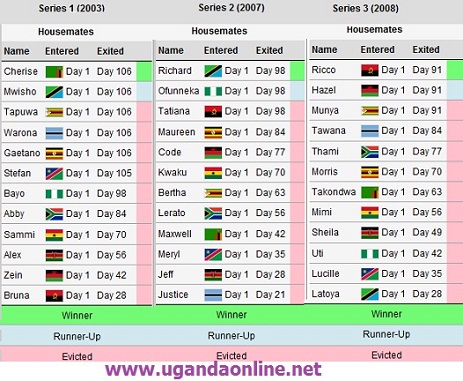 The first series of Big Brother Africa was held in 2003 and ended up in a win for Zambia with Cherise Makubale taking the prize money. Gaetano Kagwa represented Uganda and in the sixth week, he was swapped with Cameron Stout a contestant from the Big Brother UK. Uganda and Tanzania did very well because much as they did not take the day, Mwisho was a runner up and Gaetano was the first housemate to leave the house on the last day.

Biggie must have been broke because the next time we heard of Big Brother was in the year 2007 when Big Brother Africa 2 bounced back. Uganda was represented by Maureen Namatovu who pushed until the second last week leaving three housemates in the house. Richard from Tanzania took this one home.

Biggie is now coloured and the biggest reality TV show in Africa is becoming an annual event. Big Brother Africa 3 hits our tellies in November 2008. Uganda was represented by Morris who did not do very well compared to his predecessors. He left five housemates in the house. This was taken by Ricco from Angola.

In September 2009, Big Brother Revolution bounces back. This is when Biggie started his tricks of bringing in more than one housemate per country. Nigeria was the only country to have three housemates and in the end the winner(Kevin) was from Nigeria and yet some countries had only one representative. Uganda had two representative Hannington and Phil.

In July 2010, the game is back and this time dubbed 'All Stars' implying that previous contestants not winners though were given a second chance. Uganda got Hannington bouncing back only to be ejected on day 61 after a nasty exchange with Lerato from South Africa. Uti from Nigeria took this. He even lost his dad while in the house.

In May 2011, the game is back again but this time amplified with all countries having two housemates except for two countries Mozambique and Angola with one housemate each. The girls were sixteen and the boys were ten. Unfortunately as you read this, our boy Ernest Wasake was the first Ugandan to be evicted after he had sex the previous night with the Tanzanian TV presenter Bhoke who is also watching the game from out.

Uganda now has one representative Sharon O who is likely to last for over 50 days in the house. The winner will walk away with US$ 200,000 after 91 days for the show that commenced on May 01, 2011.