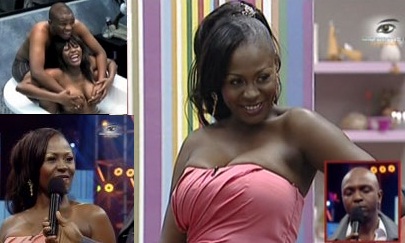 Seven Housemates were up for eviction last week and by the end of the Sunday show five bounced back to the 'Heads' house and Weza joined the 'Tails' house.

Confidence you have 30 seconds to leave the house...and she confidently said I will as she assured the other headmates of how she was going home to have some champagne. On stage she told IK that every moment was great to her.

IK asked her who she hated most and all she told IK was she had put all that behind her and she was moving forward before the show crossed to show her highlights in the house. On asking her who is going to win she was very quick at saying no one in the heads house is going to win may be the Tails house.

With Confidence being evicted, it leaves Ghana with only Alex the fashion designer. Hanni-Ethiopia, Vimbai-Zimbabwe were saved. Zeus-Botswana and Millicent from Kenya had been saved earlier in the show.

Meanwhile, many have been wondering how amplified the show is, but this is indeed amplified as this version of Big Brother will have two winners both walking away with US$200,000.

The housemates do not know that apart from you, IK and Big Brother. They will only learn of it the D-Day...Team Sharon we go we go....!