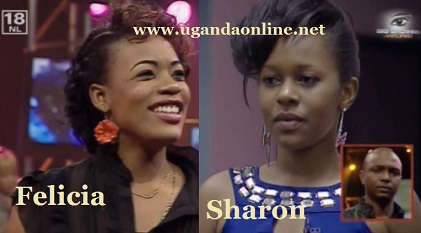 Tears were rolling down Sharon's cheeks long after Felicia had left the house clearly showing how shocked she was after being up for possible eviction. The show was graced by Shaa from Tanzania who disorganized IK for a greater part of the show as she did her 'Crazy' track.

The show crossed to last week's evicted housemates Danny and Nic. Danny insists he misses Alex the most much as he nominated him. Nic was also interviewed and of course the issue of Kim came up. However, he said he is in a six year relationship and cannot mess it up just because of Kim he's seen for weeks.

The cameras turned to the house but the housemates could not hear IK, Biggies' machines let down IK not once but twice as they failed to synchronized the sound in the house and the stage.

They made a quick and logical decision to bring in the Amplified Crew to bridge the gap. Moments later the sound was back and IK did not waste any time crossing to the house and asking Vina to reveal to the other housemates what her decision was.

Vina was the head of the house and so she saved herself and swapped with Felicia. Biggie swung into action and told Felicia of how she had only ten minutes to pack her bags. She rushed upstairs together with the entire gal brigade and packed all the g-strings and other items.

Millicent was the first housemate to be called, followed by Zeus and Sharon. IK was quick at telling Zeus how safe he was. The host of the night called our Sharon at this moment...she said "I hear you, I hear you let's go on..''You are safe'' IK roared. She immediately knelt and thanked Africa.

Meanwhile, if you recall the first Big Brother Amplified kiss, it was between Millicent from Kenya and Alex from Ghana. Millicent has now joined the Tails house where Alex is and in fact they almost kissed the moment they saw each other. Karen from Nigeria kept on cheering them to go on and kiss.

Miss P is sad and blue after Millicent has joined the Tails house because much as Alex was a bit reluctant with going very far with her, they were close buddies. This is however going to be affected with Millicent in the Tails house.

IK bounced back to the house for the nominees who did not know their fate and assured them that they are all safe. This is the third nomination Sharon has survived since the show kicked off a clear manifestation of a game well played with minimum efforts.

Related: Sharon O and Seven Others Up for Eviction