The House Is Now One as Tails and Heads Unite
Tuesday, June 28 2011 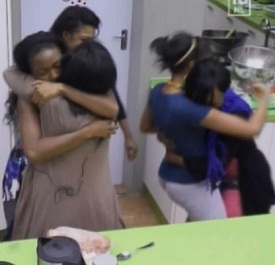 Its thirty four days to the grand finale as the Heads and Tails houses got scrapped bringing the housemates together again like it was in the first weeks. Alex and Millicent were still celebrating their union after the two houses put a 'berlin wall' in between them but before they could explore the new found love, Unpredictable Biggie swung into action with his surprises in the game.

The game has now started and the girls who were bickering over the scarcity of men in the Tails house can now rediscover themselves in the main house as the boys are now in plenty.

Miss P is one of those who have benefited most from the move that biggie pulled on day fifty seven. She had managed to dominate Alex from Ghana to herself but with the coming in of Millicent to the Tails house, life had become so hard for her and in fact she was stressed.

All that is now a thing of the past as the game seems like it has just started and all housemates have to play the game because we are close to the final month which means that identification of winners kicks off.