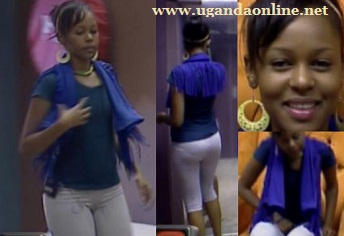 Sharon O was clad in a blue top and grey leggings which exposed her shapely legs and nice booty to Africa and she seemed to enjoy every moment as she moved around the house with a swagg.

But the same attire made life equally hell for her as she constantly brought the VPL visible panty line to order. Smart as she was, the panty could occasionally make its way to no go areas forcing her to put it right now that all camera's were on her.

Meanwhile, Sharon was up for eviction last week and was only saved by Uganda as that was the only vote she got, however, it was enough to save her because Felicia got zero votes after her country, Malawi gave it's vote to Lomwe leaving her hanging in balance.

Hanni took the day home with 5 votes, followed by Wendall with 3 votes, Lomwe and Zues got 2 votes each. Uganda's Sharon, Kenya's Millicent and Vimbai all got 1 vote leaving Felicia with 0 votes and that is how she packed her bags.

Just wondering what the O in Sharon's biggie avatar means could it be Otono...She is now being called 'Sharono' but so far so good from the Ugandan representative.