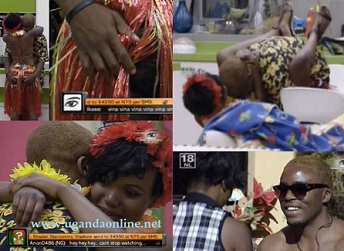 Zambia still has two female housemates Kim and Mumba in the Big Brother Amplified house but Kim is prepared to outshine her fellow countrymate Mumba to make sure she is the only one from her country in the race for the US$ 200,000.

She was very close to Nic from Kenya to the extent that a day could not pass without her and Kim talking about 'labola' or bride price. In the end, the two fell out very badly that Kim had to nominate Nic.

As fate could have it, Nic emerged as the housemate with the least votes and accordingly, he packed his bags to Kenya leaving Millicent as the only representative in the house from Kenya.

She has now turned her guns to Lomwe whom she grabbed after the house was re-united. remember these two were leaving in separate houses when we used to have the Tails and Heads, now whether this is another 'Nikim' stunt, we will only tell when her true colours eventually shows.

She is however, one gal who is playing her game and I think she is playing very well bearing in mind that in the first weeks of the game, she looked dull but now even her 'Igwe' accent just gives her a package and a ride over her fellow countrymate Mumba and some few housemates.