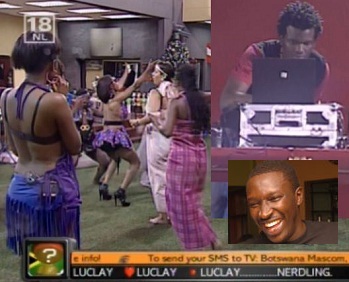 Housemates were first treated to a Saturday music show by former Big Brother Africa 4 contestant Leonel Estevoa before DJ Val Okecho from Uganda took over for the one hour Saturday show that was live on 88.2 Sanyu FM in Uganda.

The housemates enjoyed themselves because as opposed to other Saturday parties, this one was beyond the one hour courtesy of Leonel's session. Sharon was clad in some blue stuff that could bring out all her assets.

She shouted her voice out when she saw the logo of Sanyu FM running around in her pink high heels. Problem is that Val did not play any of the Obsessions' song not even Big Brother's favourite 'Jangu' but at least he played 'Ashawo' by Chinedu though it seemed new to the housemates.

At the end of the show, she of course did not recognize Val may be because of the cap he was donning but also went ahead to remind him that; "Im Sharon from Uganda, but you did not play Jangu."