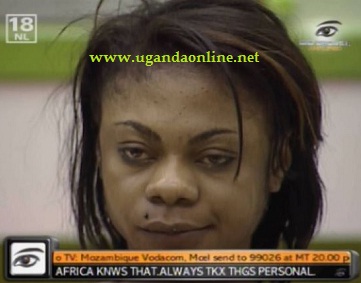 It is called the Big Brother game and at the end of the 91 days the winner takes it all. We saw how Kim played Nic and now she has made it clear they do not have a future with Lomwe who was very close to Hanni in the earlier weeks.

Last week Karen was the HoH and as a unique way of playing the game, she sacrificed herself a move that was by all standards successful looking at her score of 8 votes followed by Sharon who garnered 3 votes.

It is not clear whether her feelings with Zeus are part of playing the game, but at least with her loud voice and rough way of talking, she coils her tail in between her legs when Zeus is around her. In today's chat room session, she even went ahead to beg Africa to save Zeus claiming that she has not yet known him enough.

She got a problem with her leg this afternoon forcing most of the housemates around her for a greater part of the day. Biggie later availed her with crutches to support her in her movements around the house.

She is also determined to play the Friday arena game and according to her, if the leg is not okay by Friday, she will use the crutches. Now hoping the leg is not her latest stunt to get sympathy from Africa, we will wish her a quick recovery but this being a game with big prizes for the winner, lots of tricks are exhibited by these housemates and we just may be right to say that she might not have a big problem with her leg after all.