Liz Coka Travelled All the Way to Catch Up With Phil
Tuesday, January 31 2012 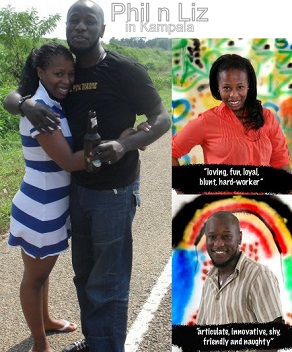 Big Brother Revolution was that version which had as many as 25 housemates. It had twins Edward and Erasmus who could switch every week by playing as one housemate. It was this very house that the issue of evicting two housemates started of course because of the numbers.

Uganda was represented by Philbert Okure aka Phil and Hannington who was later disqualified for unleashing his wrath on South Africa's Lerato. This is about Phil though. He was evicted on day 21 and he was the fifth housemate to be evicted.

His life in the house was so short lived but he had laid serious strategies with Liz Coka from South Africa who was able to stay in the house up to day 42. The two later caught up at the grand finale and to reflect more on what they had started in the house.

The show ended on December 06, 2009 and five weeks later, Liz was on the next plane to Uganda. This house produced two couples who are now proud parents. Elizabeth Gupta from Tanzania and Kevin Chuwan who also won the Revolution prize of $200,000 hooked up from this house and are now married and are blessed with a baby gal.

Another couple from the revolution house was that of Quinn Sieber from South Africa and Jeniffer from Mozambique who hooked up. Jeniffer noticed the chemistry early and instead opted out of the house. She later caught up with Quinn outside the house and the rest is history..They are now blessed with a child.
Posted by: uowd AT 06:58 am   |  Permalink   |  Email
Tweet
Uganda Online Entertainment News