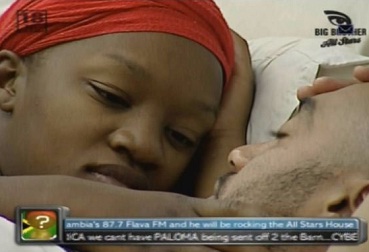 The Big Brother Africa family is growing and it continues to grow with Meryl and Mwisho who hooked up in the house having their first child. Meryl gave birth to a bouncing baby girl on Monday.

Meryl and Mwisho held their engagement party in the Big Brother house which was seen by over 40 African countries. Meryl has shocked many fans as looking at the way she was playing her game, many dod not expect them to come this far.

They have both had two chances at the Big Brother game and come out without the money but at least they have something out of Big Brother talk of finding love in a hopeless place, said a fan.

Mwisho first appeared in BBA1 and Meryl was a contestant in BBA2 if you remember those days when the game only had 12 housemates and each week saw one leaving the house. Big Brother came up with another twist of bringing back those contestants who had graced the show before. This is how Meryl and Mwisho hooked up.

In total we now have three official Big Brother couples who are Quinn and Jenipher, Kevin and Elizabeth and now Meryl and Mwisho. All the couples have a child at least.

Meanwhile, BBA7 promises even more fire because housemates are all paired...so in most cases there won't be any waiting now that the housemates would be familiar with each other's whateverrrr!