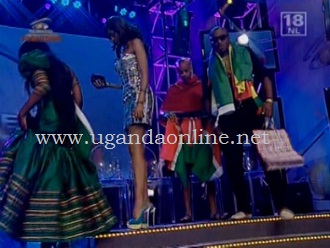 IK and our very own Flavia Tumusiime got the ball rolling with IK wondering why they should not introduce him as James Bond before J.Cole who was performing in Africa for the first time hit the stage.

Flavia announced that 14 couples will be in the Downville house and will not nominate each other. The show then crossed to Big Brother highlights around the world revealing 87 countries and 346 housemates.

VIP Upville House - This will be housing the seven starmates who were already introduced to Africa earlier on.

Upville Housemates - DKB From Ghana was the first VIP to enter the followed by Prezzo from Kenya. Lady May from Namibia, Goldie from Nigeria, Barbz from South Africa and Mampi from Zambia was called but she was delayed. Rocki from Zimbabwe walked on stage with a swagg.

DKB will slap you if you slap him was asked if he was going to be faithful, he said he will be very faithful to Big brother but not his wife.

Prezzo from Kenya who was born to be an entertainer promises to be himself and has no strategy. he came dressed in Masai swagg. He says his fans will have a cool 91 days to see him.

Lady May from Namibia is unstopable once on stage and once she wins, she wants to buy a house because she is tired of paying rent. She came with a drum as her lover.

Goldie from Nigeria - No one can love you better than yourself, so she will love herself for the 91 days.

Barbz from South Africa - The model with serious curves was the next to be unveiled and she promises to be sexy.

Musician Mampi from Zambia - Told off IK he is engaged and she assured Africa that she will survive Africa.

Rocky from Zimbabwe - Breakdance is his strategy to win the USD300,000. They got to the house and they seemed to like what they saw.