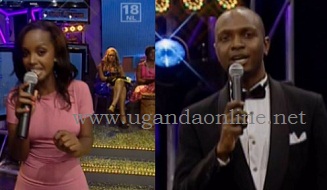 After the VIPs had gone to the house the show crossed to the Downville housemates who also happened to be couples ranging from friends, lovers, brothers and sisters.

Angola - They've been friends for three years. They are very good friends and the gal says he is single. They want to be themselves.

Botswana - Eve and Edith - They have no strategy they are just going to be themselves and they promise not to do the illegal stuff.

Ghana - Mildred and Keitta have been together for a year and half. Mildred got attracted to Keitta because he is calm. They say their affair is complicated with a lot of differences. They however contradicted themselves during the auditions.

Liberia - Luke and Yadel have been friends for 8 years but they are not dating and they have partners outside the house. She says that he loves the ladies and will have at least 3 ladies in the house.

Malawi - Afe and Wa (Cousins) - One of the is single and the other si not.

Namibia - Jescia and Junior (Friends) - They say they love each other and when IK asked them why they had to chose each other, they seemed not to have an answer.

Nigeria - Chris and Ola(Not even friends) - They are ready to emulate their predecessors who won the previous seasons.

South Africa - Keagan and Lee - The gals in the audience were pretty excited about these ones.

Sierra Leone - Dalphin and Zainab - These gals have been friends for seven years and it is the first time Sierra Leone is being represented on the Big Brother Africa show.

Tanzania - Hilda and Julio met when they were still kids and they are not dating, have supportive partners outside the house.

Uganda - Jaenette and Kyle - Not friends with benefit and the gal says not now but may be later.

Zambia - Born of the same mother and different fathers.

Zimbabwe - Maneta and Teclar - Not sure of whether they are dating. The housemates from all over Africa made their way to the house and the action in the house now begins.