Tanzania and Zimbabwe Housemates Up for Eviction
Monday, May 07 2012 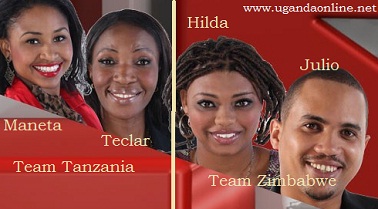 Maneta, Teclar from Tanzania and Julio, Hilda from Zimbabwe are up for eviction.

The no nonsense Big Brother comes up with new twists every season but this one is off the hook. The Big Brother Stargame house has two houses i.e. the Upville otherwise the VIPs who don't get nominated and Downville which has all the housemates who entered as couples.

Nominations will this time round be done by a random nomination device which spins disco balls representing the various countries in the Upville house. A ball is then selected and the country on the ball are the housemates who go up for eviction.

The girls could not believe it that before they could even know the names for the guys, they were already up for eviction. The resorted to drinking realizing that every minute in the house an asset as the dream of spending 91 days in the house was under check.

Africa had better save Hilda from Tanzania because she is a package looking at babes in the house. Meanwhile, one of the housemates from Nigeria said a short prayer for the housemates who are up for eviction so that they survive the Sunday axe.