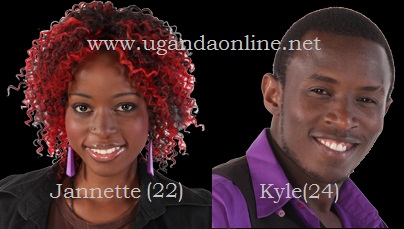 Ugandan Big Brother fans were yesterday shocked when the couple they were counting on to represent them in the house are actually here in Uganda watching the show like any other person.

Natasha Sinayobye and Michael Kasaija were widely believed to represent Uganda but when IK mentioned Uganda, it was unknown 22-year-old Jannette and 24-year-old Kyle who are to be in the house on the Ugandan ticket.

Jannette Lutaaya is a dancer and Kyle Duncan Kushaba is a journalist. She is a Hot Steps dancer and won some money after beating many at that so the starmates should be prepared to learn some hot dance moves. If this was a dance competion, the budgeting of how she was to use the money could have started.

The Big Brother team always looks for crazy people to get in the house but from the lot that went to Sheraton for auditions, we are yet to know what reason these guys used to beat the likes of Straka, Idringi, Natasha, Michael and a string of babes that were doing the catwalk at the Sheraton Hotel corridors.

Jannette told IK that they are just friends but may be as the show picks who knows..they could be looking at things from a different angle.