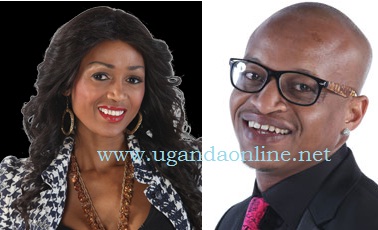 It was a matter of time before the South African housemate Barbz could fall out with Kenya's Prezzo in the Upville house. It all started earlier yesterday during Prezzo's diary session when he told Biggie of how he did not like the g-string she was putting on and her character generally.

As you may be aware, Barbz is the head of house(HOH) for the Upville house this week so she was called to the diary room for a task that came in rather late and required that the VIP housemates put on their costumes and head to the jacuzzi to scrub themselves.

As Barbz read the task to the Upvilles trying to demonstrate how it was to be done like the boys scrubbing the boys or gals or whichever way they preferred. Prezzo responded by calling her "Miss Mademoiselle" and "Tyra Banks" as he tried to assure her that he could not stand his daughter back home watching him scrub a man's thighs.

The argument got to boiling point forcing Prezzo to go to the garden where he was joined by Goldie(Nigeria) who tried to calm him down. "I won't stand bulls**t, everyone in there has a clean heart apart from her. 'Sorry' and 'I love you' are hard to come out of my mouth."

Having failed to get to terms with Prezzo, Goldie went to Barbz to try and get her put everything behind her so that they could make up and move on, but Barbz stood her ground and said, she will not apologize.

Meanwhile, Rocki was busy rubbing Lady May's back in the jacuzzi and she was enjoying every bit of it, Prezzo on the other hand was in the Jacuzzi rubbing Goldie as Goldie rubbed Barbz's feet.

After the rubbing, Lady May(Namibia) and Rocki(Zimbabwe) won the task and they celebrated in a summersault style. At this rate, it looks like Prezzo has a soft spot for Goldie..Watch this space!

Read Also: Prezzo Opens Up to Big Brother About Barbz