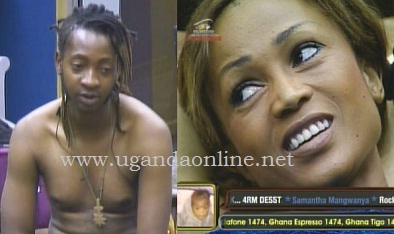 The situation in the Upville house is becoming hot by the day as Rocki threatens to be bull in the house. He was very close to Lady May from Namibia to the extent that he enjoyed the rubbing game with her which they won in the end.

In a twist of events, Rocki(27) is now after Barbz(34) from South Africa and given his style, he is determined to cross the line. Roki swung into action last evening with these words;

"You look like you can chew me up and spit me out", Barbz wondered but Rocki did not stop at that, he added: "You're just a big snake with beautiful spots that I would like to caress"

Being the big mama she is, Barbz quickly noticed the route Rocki was taking and told him how she has a man. Rocki insisted as Barbz told him to go and have a shower. In the previous season of Big Brother, Michael was on Sharon O's case but he was evicted before we could see the fruits of their relationship.

We now watch the developments between Rocki and Barbz who is not on talking terms with Prezzo from Kenya. Meanwhile, Mampi seems to be interested in DKB..! Watch this space!