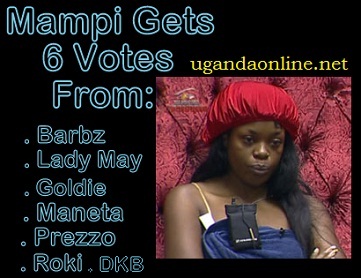 The Downvillers are relaxed as the pressure shifts to the Upvillers this week and this time the VIP housemates nominating each other in the first ever human nominations in the Big Brother Africa Stargame.

The past nominations have been done by the random nomination machine that has seen six housemates leave the Downville house. The Upville housemates saw their honeymoon come to an end after three weeks of relaxation and not knowing how it feels like being up for eviction.

Mampi from Zambia emerged as the Upville housemate with the highest votes totalling to six followed by Maneta from Zimbabwe who had (3) and comedian DKB from Ghana also having (3) votes.

DKB is the current head of house so those nominations will be put to waste as he will swap himself with any other housemate of his choice. Lady May is widely believed to take up his slot on the chopping board now that when he was nominating, it was Lady May that he put up for eviction.

Maneta is on the chopping block after fellow country mate Rocki put her up. Talking to Biggie on Monday evening, she revealed that Rocki was interested in her and she told him off and not even think of it now that she has a boyfriend outside the house.

Meanwhile, Mampi who is widely blamed for gossiping in the Upville house and the main reason she topped the nominations has said she is going to attack the whole process head on and she has started packing her belongings ready to leave the house.