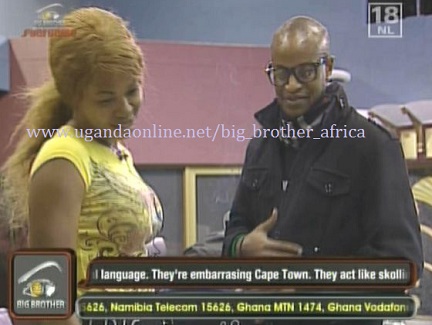 It is now 34 days out of 91 when the Big Brother show started showing on channel 198 for those exclusive to DSTV.

In this season for example, he introduced the VIP section which had seven housemates and its those countries that had three housemates in total representing their respective countries.

Lets take a look at how those countries are fairing after a month in the house.

Nigeria - Ola, Chris and Goldie came into the house on the Nigerian ticket but just after 14 days, Ola succumbed to hyper tension and could not play the game anymore. Ola and Chris were in Downville where they play the game as pairs, so the two had to leave. Nigeria now has Goldie in the Upville house who is busy nursing a broken heart after Prezzo told her they were only friends.

South Africa - Lea and Keagan are in the Downville house while model Barbz is doing well in the Upville where she has also been HOH. However, the Indian accent for the Downville folks is not making things any better. Keagan's bad temper after he has taken just one bottle makes him better off playing the game from Southville.

Namibia - All hopes for Namibia are on Lady May as the Downvillers, Junia and Jessica are only trying. Some Big Brother pundits have started putting the money on Lady May who is next weeks HOH. Jessica has not got much to bring to the table apart from her making out with Luke from Liberia if it is anything to go by.

Ghana - They were blessed with a VIP placement in the Upville house when comedian DKB got to the house but his strategy of fighting was a complete off that even if he was not disqualified, he would still be evicted because that CV was not good per say. Some fans say he is better off trying boxing or wrestling because, housemates and viewers were not able to detect any humour in him.

Two days before his disqualification, Ghana had fallen a victim after Mildred Ashong aka Eazzy who is now battling with fans on whether she had sex on telly or not, got evicted as her boyfriend Keitta was upgraded to Upville.

Kenya - No doubt Kenya is doing very well through their rapper boy Prezzo who is also East Africa's hope in the game now that the Tanzania duo of Julio and Hilda were evicted and the Ugandans are still in the Downville house. Alex and Malonza who are the other Kenyans in the Downville house are friends with our gal Jannette and this could work in her favour when she is up for possible upgrade to the Upville.

Zambia - Mampi was the first Upviller to be evicted that her thunder dance tactic did very little in saving her. Mampi was a dancer and her fans really enjoyed her but then again, she was a lot better than the Downvillers, Tamara and Talia. Talia is doing badly after her boyfriend Seydou from Angola left the show.

Zimbabwe - Maneta and Teclar were the two sisters playing the game from Downville to the time when Maneta was upgraded to Upville where she met fellow country mate Rocki. Maneta was nominated by Rocki but then Africa said 'NO' and she bounced back to the house. She is one housemate who has been up for eviction in both Downville and Upville but came out stronger.

The winner for the $300,000 will come from the above countries as the rest are just filling the gaps.