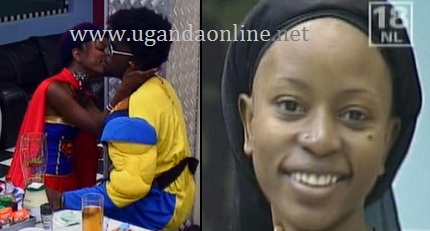 History is repeating itself here. During Big Brother Africa 2, The Malawian housemate then Code Sangala almost forgot about his wife back home when he got so involved with Maureen Namatovu in the house.

Those were the days when the role of Head of House(HOH) could come with so many privileges like going away from the rest of the housemates to an exclusive room which had massage oils, and a cocktail of drinks among others.

Just like Mildred from Ghana, Maureen went through a lot convincing viewers that nothing went down. Those days, viewers could not sleep because of the uncut shower hour clips that could be shown late in the night.

Now just recently, we told of how our gal Jannette was very close to Wati from Malawi and now it's real getting serious. Last evening, Jannette grabbed Watti by the neck wanting to swallow him that very minute but Watti coiled after one of the cameras were focusing on him.

A few days back, Jannette was kicked out of Malonza's bed several times as she tried to give him some, she then opted to kissing Malonza by force. Jannette's wish is to go to the Upville house before she leaves the house, will her strategy of getting what she wants by force work?

Meanwhile one Geoffrey Gichuhi commented that; "Jannette has to be taught the meaning of lips kissing, you can't be kissing anybody you come across!, I think she just sees people kissing in movies etc, but she doesn't understand the reasons behind it.

Kissing is a very intimate and romantic interaction. Kissing is not only a part of love making, it is a ritual, formal or symbolic gesture indicating devotion and also a way to portray your love and commitment to your partner. She is disrespecting herself and lowering her dignity."