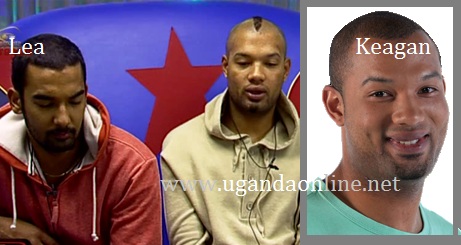 Its no doubt South Africa's Keagan is hot tempered to the point that at one time Biggie was forced to withhold booze for a week after he became drunk and was a problem to other housemates in the Downville house.

South Africa is one of those countries with three housemates, and evicting Keagan this coming week will not affect them in anyway because Barbz is doing very well in the Upville house and once joined by humbled Lee, it will be a big push for South Africa.

In today's diary session, Keagan and Lee told Biggie that they will stick to their original plan like they've been playing the game in the past. However, when Biggie asked what they were going to add to the game this week, Keagan reacted, like he normally does anyway.

"If you 're going to ask me that stupid question again, may be we should leave," Biggie was left with no choice but to end their session prematurely.

This week, four housemates are up for eviction and two will be upgraded to the Upville house. Keagan is going home no doubt. We said it before that Jessica did not have much to bring to the show for as long as Luke was evicted.

This will leave us with Lee joining fellow country mate model Barbz in the Upville house and Namibia's Junia because the support that Ola used to enjoy, most of it crossed to Junia and this will go on up to the time she leaves the Big Brother Africa house.