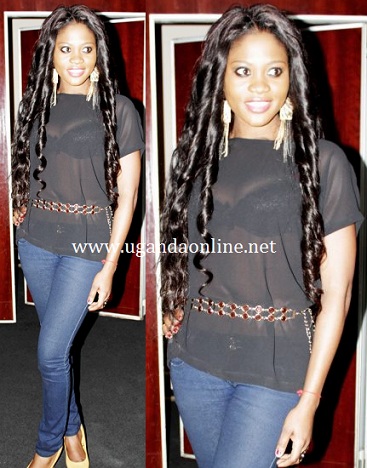 Keitta is a lucky guy when you look at his babe donning the Brazilian hair extension no wonder she refused to go on stage the day she was evicted.

She demanded that Biggs provides her with her Brazillian hair extension or she won't appear on stage and in the end, Eazzy never showed up on stage.

Mildred who was happy that she was out of the house now that she was a celebrity among most Downville housemates who were going about their lives normally was also happy for the fact that her boyfriend had been upgraded to Upville.

Eazzy told her ardent followers and fans that what many were confusing for sex was not that. Biggie told them to play the game as partners and during that time, they were busy discussing life in the Upville house with Keitta promising her not to do anything silly with Zainab.

However, when Keitta got to the Upville house, Zainab had cut off her hair and was not as smashing as she was while in the Downville house.

In her words she says: "It wasn't a selfish decision but it was based on certain reasons which I can't really say because it might go against the whole Big Brother Production. I want to tell my fans that I made a promise not to have sex in the house and I fulfilled that promise. We only spent a lot of time together and that was it".

I want to tell my fans that I did try my very best to represent Ghana with my boyfriend as a couple and I am totally sorry to anybody who was offended if I didn't come on stage but there were a lot of issues in the house concerning my hair."
Posted by: uowd AT 02:41 pm   |  Permalink   |  Email
Tweet
Uganda Online Entertainment News