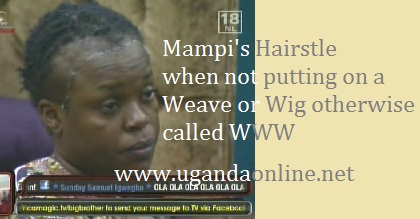 This was Zambia's representative Mampi before leaving the house and its not clear what exactly happened to her 'kiwani' hair but one thing is for sure, her hair line was terrible and the best thing that could happen to her was to have it covered.

Those who saw Mampi on the eviction nite donning that short black dress and high heels to celebrate her time in the Big Brother house cannot believe you in any way that this was Mampi.

If it was Mampi who had gone on strike demanding for a brazilian wig like sexy Eazzy did, it could be understandable given her distorted hairline. Mampi was so exhausted in the house that she did not care anymore whether the cameras were on her or not.

Mampi appeared on the stage which Eazzy swore never to step on looking hott with another extension that covered her head well. Now you know when these babes demand for those extensions, Biggie next time you should grant their requests for they are Big Brother gals.

Mampi was the first VIP housemate to be evicted followed by DKB who was disqualified after a physical brawl with Zainab from Sierra Leone.