Pictures Ghana's Mildred Would Not Want to See
Tuesday, June 19 2012 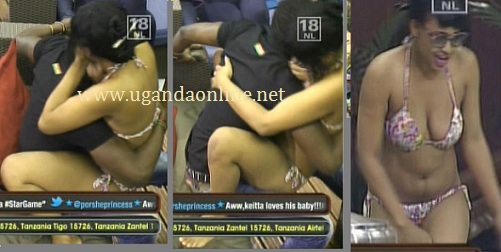 The only official couple in the Big Brother Stargame from Ghana was split two weeks back when Keitta was upgraded to Upville as Mildred (Eazzy) got evicted. The couple was having issues in the house.

Mildred at one time told Biggie that they were on the verge of collapse now that Keitta was flirting with most of the female housemates, something that did not go down well with Mildred.

Notable among them was Sierra Leone Zainab who confessed that she wanted to have Keitta's last name, Osei. Africa was glued on their telly sets waiting to see what happens after Keitta joined Zainab in Upville, but unfortunately, 48 hours later, Zainab was thrown out of the house when she was slapped by the no nonsense Ghanaian comedian DKB.

Now the latest to play with Keitta's heart is none other than Zimbabwe's beauty Maneta. Keitta has tried to distance himself from her but the 'yellow' babe is determined to get a piece of him at least before she is evicted now that the two are on the chopping block with Barbz from South Africa.

Biggie replenished the store room with some hard stuff yesterday bringing a big smile to most housemates who had started complaining of boredom most especially the Downvillers.

After taking one too many, Maneta spread herself like an eagle and wanted to swallow Keitta like a python that had landed on its prey after 45 days without meat but Keitta was hesitant and instead tried telling her that he looked at her as a sister and also his girlfriend Mildred was watching.

After this 'hug' that lasted several minutes, Keitta was heard saying that I no longer have Mildred. Rocki told him to be strong and not to fall for the Big Brother Galz traps. Keitta and Maneta need to be watched this week as there has been a tendency of such housemates losing temper in their last minutes in the house and giving out their all.