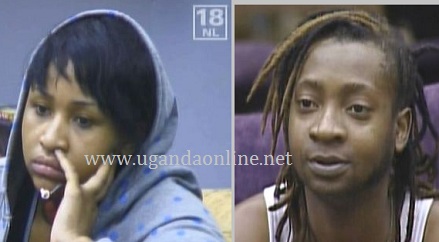 Maneta has spent the whole afternoon crying failing to cope with the fact that she is up for eviction. She was putting on her sheds to the time Big Brother banned sheds in the house, she resorted to covering her face with a black cloth.

Big Brother roared again, housemates no headgear, this is when she let her hair loose covering her eyes. She then decided to go upstairs with Keitta following her, she warned that please don't come near me.

Its important to note that she was putting on black all through and did not want her eyes to be seen by anyone. She looked herself in the mirror while crying as Biggie called Keitta to the diary room.

Its at this point that she attacked Rocki. The cameras had turned to Keitta so as Africa, we missed the footage of how Maneta got to pour the cleaning detergent to fellow country mate Rocki's eyes. Keitta's diary session was suspended immediately as Biggie now had to summon Maneta to the diary room.

Upvillers got the milk they had and poured in Rocki's eyes as a quick remedy to restore his sight. Some of that stuff spilled over to Lady May's eyes, so the two housemates were panicking after they thought they could lose their sight.

At the time of filing this report, Maneta was still in the Diary room, and chances are she could be disqualified.