Jannette and Talia in Battle Over Malonza
Sunday, June 24 2012 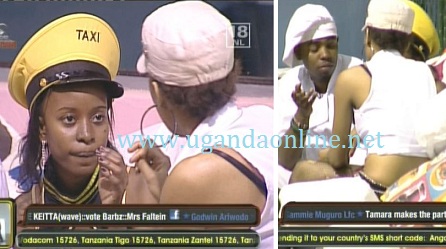 Shortly, after the dance, Jannette who was visibly drunk and Talia settled for serious discussions about Malonza. Talia was concerned whether Jannette was having anything serious with Malonza most especially after the steamy kiss they had a few days back.

Jannette made her point clear to her that there was nothing serious going on between the two and she said, she did not enjoy the kiss, Talia whispered just to make sure Africa does not click, but our resident experts were following every bit of the discussion.

Meanwhile, during the dance, Malonza was locked in a raunchy dance with Jannette when he held one of her legs by his hip and danced while gyrating their bodies, and since Jannette is a dancer, she danced erotically to the extent that Talia felt she stood no chance with Malonza.

Tonight, BIG FISH Barbz from South Africa will be tussling it out with Ghana's Keitta to determine who goes to Southville or Ghanaville, keep it locked.