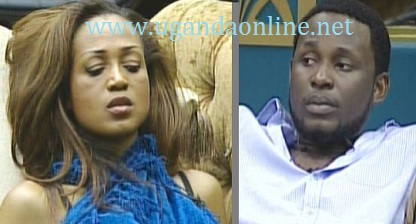 It's Day 49 with 42 days left as the oldest housemate, South Africa's model Barbz was the latest VIP to be evicted from Biggie's house. She got 4 votes against Keitta's 11 votes.

But before that, the Maneta-Rocki saga was shown and it clearly showed that Rocki attacked Maneta first and whatever she did was out of frustration and if anyone has to be blamed, it has to be Rocki.

The show then crossed to Upville. IK told Junia that we were not hearing her voice in the Upville like we used to in the Downville. All the Upville housemates were then called to the lounge by Biggie. Keitta and Barbz were standing next to each other as they waited for IK's announcement.

Ghana's Keitta was called twice before they told him that he was safe. Barbz was then told that she had been evicted.

Barbz did the catwalk...OMG I'm just excited to see so many faces, she said. Barbz had a thing for people from Ghana and she was blending with Keitta. She had a trophy for her mom. As she was leaving the stage, she did the catwalk in the wrong direction before she was called back. She again cat walked off the stage.

Random Nomination in the Downville
IK joked with Watti and told him that he is cool while drunk, to which he said, Thank you. IK then crossed to Kyle, you've been quite all along what inspired a certain vocalization of your thoughts? Kyle said I'm a man of all seasons. IK crossed to the balls.

Talia and Tamara from Zambia were the first ones to be nominated followed by Nafy and Wati from Malawi. This week, Africa will save 2 Downvillers not necessarily couples.