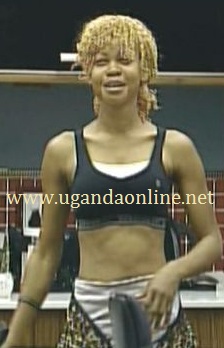 Nigeria's housemate Goldie spent the whole of yesterday crying after the game had taken its toll on her, so below we bring you the possible reasons behind her crying.

1. Prezzo's love - She opened up to the Kenyan rapper Prezzo to the extent of even learning some of the lines in his songs as a way of communicating to his heart but wapi, she eventually realised that things might not work out as she had anticipated.

2. Head of House - Goldie was last week's HOH a post that comes with 'Save and Replace privileges. She was not up for eviction so she could not save herself, but even then she had to do it or she could be up for eviction instead. She saved Prezzo and replaced him with Keitta. This disturbed her a lot.

3. Upville Bonding - Barbz and Goldie had become very close in the last 45 days and were getting along in the Upville house but the mere fact that Prezzo and Barbz were both up and she could only save one, it made the Nigerian rep fail to cope with events in the house. In the end, Barbz was evicted.

4. Disqualifying of Maneta - Disqualification of Maneta who was up for eviction left Barbz in the jaws of Africa. Had Maneta remained on the chopping block, she could have been the one leaving the house but when she used the liquid soap tactic to leave the house, it left Africa with no choice. This was evident from the 11 votes she got against Keitta's 4 votes.

5. Boring Biggie's House - 45 days in the house with no access to her fans, family and friends not watching your favourite programs, missing her boy friend was all boiling in her head. 3 weeks in the house, Zainab was missing sex badly how about Goldie who had gone a full six weeks without her favorite missionary style, no wonder she had resorted to kissing Prezzo under the guise of her 'goldie' weave.

6. Never Watched Previous Episodes - Goldie had never watched Big Brother Africa shows before and so she did not know that when it comes to Big Brother, that is how the game is played. She thought it was a matter of cat-walking in the house, but things were not working out. It could have been a different game for her had she watched but for now, its teary Goldie in the house.

7. Fear of competition - Initially they were the Big seven but all of a sudden, the once famous VIP Upville house had turned tables on them and instead Downvillers are taking over the house after Mampi, DKB and now Barbz have left the house.

8. Lady May Kitchen Take Over - Goldie has been using the kitchen as her grip on the game but Lady May has known that trick and she revealed this to Biggie in one of her DR's sessions that she will always go to the kitchen as long as Goldie is there.

9. Goldie Hair Extensions - Gold is her trademark. This can be seen from her gold carat hair, but it looks like she is running out of those hair extensions and constantly having bad hair days. Biggie only brings hair stylists for those up for eviction, fortunately or unfortunately Goldie has not yet had this chance.

10. USD300,000 - That is the prize for the last man standing and its no joke, if you are outside the house, you could think that its a bed of roses. The race is still too tight for her and yet she is just half way down the line.