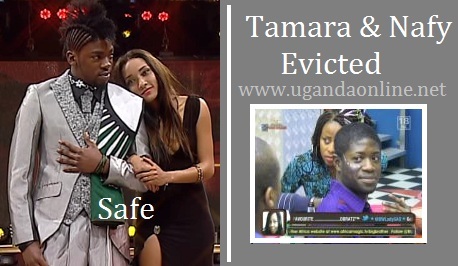 35 days to go with 14 housemates left in the house. Zambia's sisters Tamara and Talia together with the Malawian pair were up for eviction last week and at the end of the show Nafy and Tamara were Evicted as Talia and Wati Upgraded to Upville.

Seydou was in the house watching the Big Brother Stargame live from South Africa before the show crossed to Barbz who was still excited about Biggie's voice and she missed being reminded that she had to make sure her microphone was fixed properly.

The show crossed to DV showing a preview of Uganda's Jannette being kissed by Kenya's Malonza among others and then highlights in the UV were shown.

IK went for the business of the night, which was eviction. Will the two couples up for possible eviction please stand, wish you guys all the best, IK roared. Nafy and Wati, please leave the house.

Toya De Lazy hit the stage with a thrilling performance that got the audience going wild. Nafy and Wati were smartly clad in their suits and when IK asked Wati about the alcohol, he said; 'I love my alcohol'.

The show crossed back to the DV and Tamara, Talia were told to leave the house. On stage IK started with the rivalry between the sisters and they kissed to show that they had put all that behind them. Talia was in a black long slit dress and based on Tamara's highlights, she is a dancer and IK told them to strutt their stuff a little for Africa. Talia was asked if she could continue with Seydou, she said yes as she spotted him in the crowd.

The first housemate to be evicted was Nafy who handed the flag to bad boy Wati. Tamara was the next to be evicted. Wati got 30% of the vote and Talia 60%. They were upgraded to Upville.

Toya De Lazy bounced back. She is one of the best performers Biggie has brought to the Big Brother Stargame live stage. She loves P-Square and she could do a collabo.

The two houses Dissolved
The show then crossed to Upville and Junia was so happy to have drunko Wati to Upville. Biggie then delivered the two couples from Uganda and Kenya to Upville by default officially making it one house. Wati and Talia are immune from nominations but the Kenyans and Uganda's Kyle and Jannette are now playing the game as individuals and will be subject to participating in tomorrows nomination exercise.