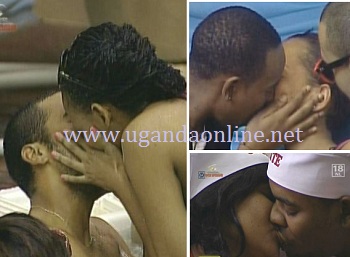 Uganda's Kyle is safe after Malonza and Junia fell the victims of the night when Africa decided that they go home.

Malonza from Kenya was casually dressed and did not have a clue that he was going home. On announcing that he was leaving the house, Junia broke down. IK asked him about Junia and he said they were special friends.

He was asked about Uganda's Jannette and the Kenyan lad said he was friends with benefits when it came to her. In his highlights, there was more of him kissing with Junia.

IK bounced back to the house and told the ladies Lady May, Junia and Goldie to stand. Lady May was told that she is not leaving the house leaving Goldie and Junia waiting for their fate.

Namibia's Junia was the next housemate to be evicted. This was more than a welcome move bearing in mind that a few minutes back she was in tears after her 'boyfriend' Malonza was evicted.

Asked if she was willing to mingle with Malonza, she said may be. Junia came on stage with no shoes. Junia told Africa that she has no beef with Jannette. They can now have some quality time with no Biggie cameras trailing them.

Related: Uganda's Kyle Is Up For Eviction