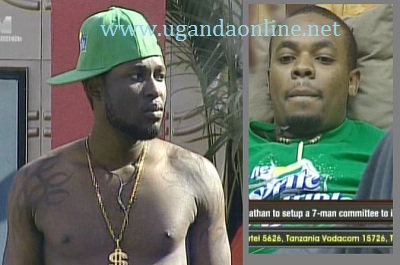 Prezzo, Keitta, Lady May, Wati and Alex were up for eviction last week and by the end of the show Ghana's Keitta and Kenya'sAlex were sent home.

Uganda's Kyle was the Head of House last week. IK called him out to reveal his decision as head of house to fellow housemates. I saved Keagan's a**e and replaced him with Keitta because according to my mathematics, Keitta can easily bounce back.

Former Big Brother Contestants Zeus and Lomwe bounced back to the stage with 'Dancing Shoes' that got the audience screaming their lungs out. IK asked them how they came to collaborate and they told him that this plan was hatched while still in the Big Brother House.

IK did not waste any time before crossing to the business of the night. He started with Wati and Lady May followed who he told that they were safe. Ghana's Keitta who was up for the second time did not survive Africa, but as he was beading farewell to fellow housemates, Talia broke down. He yelled at her, Don't f*****n do that.

On stage, IK asked Keitta on why he would not allow his girl friend back to the show and he seemed not to recall having mentioning that. He was then asked why he does not shower regularly in the house, and to this he said the house is so stressful and there is not much activity in the house that warrants showering on a daily basis.

Prezzo and Alex who were not sure of what their fate was saw IK bouncing back and this is when Alex from Kenya was told that it was time for him to leave the house. IK asked him if he had the same taste for babes like his brother Malonza who was head over heals for Uganda's Jannette, he said no, but had a thing for Talia.

Zeus and Lomwe bounced back with their 'Double Wowza' blockbuster hit. Lady May and Prezzo got 5 votes each, Wati 3 votes, Keitta 2 votes. Alex from Kenya got 0 votes. Housemates will be nominating tonight. Watch this space!