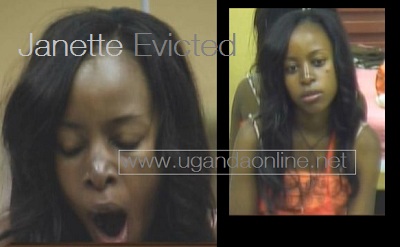 Jannette Georgina Lutaaya (21) has been evicted from the Big Brother house a week to the end of the show leaving Kyle in the house who became a finalist by default having survived this Sunday's eviction.

Jannette and Kyle have shocked very many Ugandans for having come this far bearing in mind that they did not expect them to go past the first week. During the first days of the show, eviction was based on a random ball nomination system making Uganda and Kenya as the last standing couples from Downville crossing to Upville.

Its at this time that Kyle and Jannette were to taste Africa because they were playing as individuals and not as a couple but even with this, Kyle was able to survive Africa twice. Popular housemates like Keitta were able to fall as Kyle remained standing on the same chopping block.

Tonight, Kyle, Prezzo, Lady May and Jannette were given their results of how Africa felt about them as far as the winning prize of USD 300,000 is concerned. Africa decided that Jannete goes home.

As she cat-walked to the Big Brother live stage, Jackie Chandiru's Gold Digger was playing in the background. She told IK that she is crazy when she drinks. I K asked her which housemate she was likely to fall for out of the house, she said: "I find Ola sexy and I could hook up with him."

The small princess looked too small to have a feel for Nigeria's Ola to which IK said was an abomination for a person of 30kgs to fall for Ola. Jannette quickly said she was 35kggs but this figure did not save the situation either as IK told her that his dog was actually bigger than her.

The show ends next Sunday with six housemates in the run for the top prize i.e. Kyle, Prezzo, Lady May, Talia, Wati and Keagan.