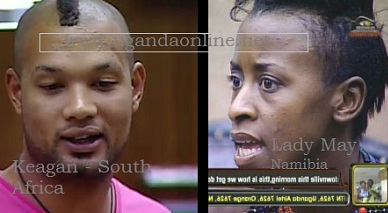 Its the final week for the Big Brother Africa reality show and next Sunday we will be able to know who walks away with the top prize. All the six housemates in the house are finalists and are competing against each other for the top prize of USD 300,000.

In their first diary session as finalists, Big Brother gave them assignments which require a housemate to act, talk and carry on their chores like its the other person. In this particular case, Namibia's Lady May was told to emulate South Africa's Keagan.

Apparently, what has failed her is the talking. On a few occasions, she has tried to bring out the 'Indian accent' but it has failed her so in the end she is just laughing her head off. On the other hand, Talia was told to act like Wati, all she has done so far was to strum the guitar.

The task will go on till tomorrow but we hope a war does not erupt between these two if Keagan gets to know it that Lady May is trying act just like him, he will erupt like a volcano.