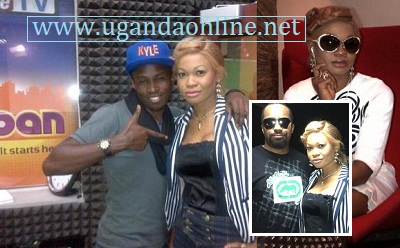 Prezzo's babe Goldie was in Kenya a few days back only to make a stop over in Uganda on Wednesday(Sept 19). Goldie was taken around town by Capital FM's Flavia Tumusiime also the Channel O VJ.

Goldie toured around Kampala though one thing was on her mind: "OMOoh! Kampala traffic is crazy. She later caught up with Kyle at his place of work, Urban TV in Industrial area where her fans called in and grilled her on a number of issues including their wedding with Prezzo.

Goldie then hit the studio to record their latest track with the 'One & Only' star Navio who is also a nominee in the 2012 Channel O MVA. The former Big Brother star and Nigerian Singer will be jetting back to Kenya before heading to Nigeria.

Meanwhile, Prezzo was recently in Nigeria and during the question and answer session, he told journalists of how he had come to propose to Goldie. The Kenyan rapper also told of how his wife with whom they have one daughter was in possession of divorce papers.

Prezzo now wants to settle with Goldie having lived separately from the mother of his daughter for three years, he feels there is no relationship anymore and he is set to marry Goldie.