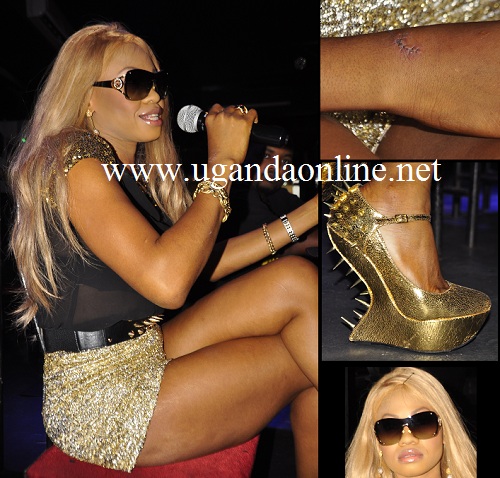 Nigerian pop singer Goldie Harvey passed away on Valentine's day from what doctors have termed as Pulmonary Embolism, a clot that travels to the lungs and can be caused by a stroke or surgery among others . She was pronounced dead on arrival at Reddington Hospital in Lagos.

Goldie like her name suggests loved Gold and the above pics were taken during her last visit to Kampala when she came to launch her collabo with Navio. Fellow housemates and other Big Brother Africa fans at large have since yesterday been pouring out tributes for the fallen star.

Goldie's UK-based hubby has also come out to share wedding photos as a tribute to his fallen wife. Goldie had always been silent on Andrew Harvey as to whether they had separated but one thing was for sure, she used not to put on a ring.

Kenyan rapper Prezzo who was very close to Goldie poured out a poetic tribute to his very good friend through his facebook wall:

"God saw you were getting tired, and a cure was not meant to be.
So he put his arms around you, and whispered come with me.
With tearful eyes we watched you, as we saw you pass away.
Although we love you deeply, we could not make you stay.
Your golden heart stopped beating, hardworking hands at rest.
God broke our hearts to prove to us he only takes the best".

Other Big Brother former Housemates like Vimbai Mutinhiri arranged a special mass to pray and remember Goldie as a friend.