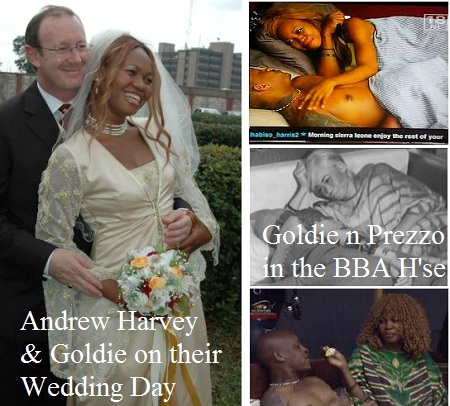 A day after Nigerian pop singer Goldie Harvey passed on, Andrew Harvey, a Briton put over 50 pictures of their wedding with the Skibobo singer on facebook which he says took place in 2005.

In a separate posting, he made it clear to Prezzo that: "Please leave our family to grieve in peace. You have caused enough hurt and pain," Andrew wrote on his wall. Goldie's husband has also made it clear to whoever cares to know that his wife wasn't on drugs.

Now it's amazing how Goldie had kept this bit of her life such a secret. Goldie and Prezzo became so intimate that when Prezzo told her that he was not serious about the relationship, she broke down until Prezzo changed his mind.

They have been so close long after the Big Brother show. Some unconfirmed reports indicate that Prezzo had even bought a house in Nigeria. Last Tuesday, Prezzo revealed how he was slated to travel to Nigeria and be with Goldie on Valentine's day.

Unfortunately, It was on (14.Feb.2013) Valentine's evening that Goldie Harvey was pronounced dead. Andrew Harvey's photo tribute now makes meaning to Goldie's last name, she was married, though it was one of her top most kept secrets.

Prezzo was equally married to Daisy Kiplangat but the two separated. They have a daughter together. Andrew Harvey was never heard of anywhere close to Goldie's circles so the issue of separating or not is out of the question, instead Goldie was publicly in love with Prezzo.

The pictures were filed under: 'A few pictures of my Time with Susan (Goldie) Harvey before her untimely passing' which included wedding pictures, Goldie's picture as a girl among others.
Posted by: uowd AT 01:52 pm   |  Permalink   |  Email
Tweet
Uganda Online Entertainment News