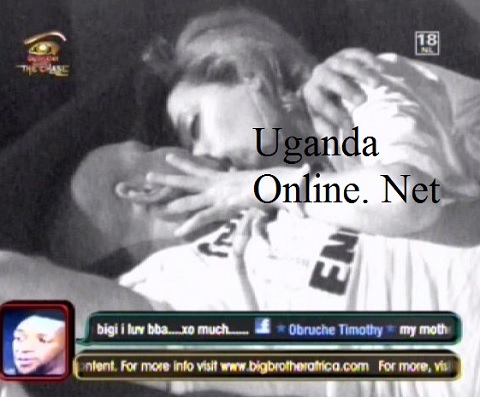 It's been only two nights in the Big Brother house but things are already getting fired up. Africa should expect a lot from this lot because at this rate, the housemates in the Diamond's house are shining like diamond. Bolt and Betty were getting to know each other better as the rest of the housemates slept.

As things got hot for Bolt to handle, he dashed to his bags looking for what resident experts have termed as rubbers but the infrared did some injustice to him. He ended up in the kitchen where he got some water that Betty seemed to appreciate now that she was very thirsty at the time.

Bolt from Sierra Leone and Betty from Ethiopia who unfortunately is up for eviction but does not know are now confirmed as the first official couple and things will even get better should she survive eviction this Sunday.

If you all remember the dude IK asked if he was married after spotting him with a ring that he quickly removed on seeing Ethiopia's Betty, that was Bolt. IK then asked him to rate Betty out of 10, and he gave her 10 out of 10. Now are you surprised with what is going on in the house 72 hours later, watch this space!