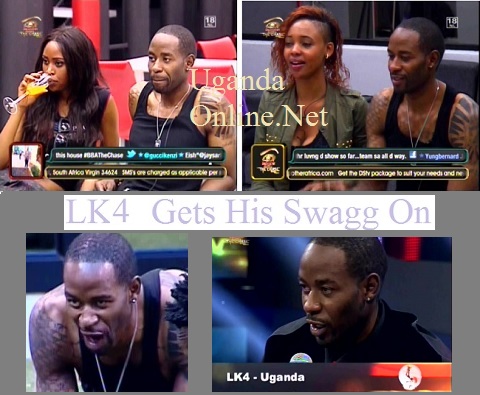 Blame it on the alcohol. Shortly after the Saturday Night party, LK4 cornered Ghana's Elikem and told him about his detailed 'Curriculum Vitae'. I'm next in line to be King of Buganda and I can make the Big Brother prize amount in just three days.

LK4 went on to tell Elikem why he was up for eviction. The ladies have seen my monster in the shower room and they all want a share of it, that's the sole reason I was nominated. This was way too much for his gal Koketso from South Africa who asked him to shut up.

His next victim was Mama Natasha. The basketball star started off by asking her if she knew who his mum was in Uganda, she is the most powerful woman in the country just in case you did not know, he added.

During the time when LK4 was still dating Zari, he was loaded but not anymore after he was shown the exit. Before meeting Zari, he had just split with his wife Sumaya and somehow he had recovered after getting another babe.

It's not clear what his new gal back home is thinking after LK4 and Koketso are behaving like siamese twins. All eyes will be glued on the show tonight to see if another Ugandan can survive tonight's eviction or they can stay in the house for more action packed series.