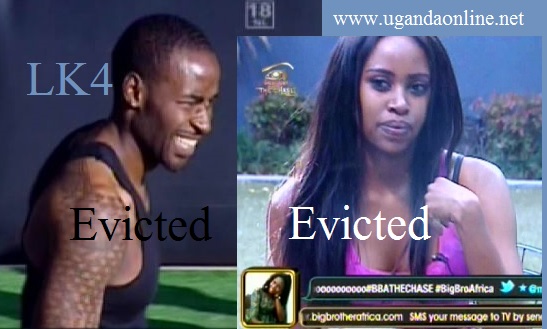 The dream of winning the USD 300,000 for Uganda's LK4 and South Africa's Koketso ended on June 09, 2013 which was the second eviction show. LK4 was the third housemate to be evicted from the Big Brother the Chase after Kenya's Huddah Monroe and Uganda's Denzel were evicted last week.

'Leka Kwenyumiriza' by Navio was playing in the background as LK4 made his way to the stage.

This marks the end of Uganda in the chase for the grand prize leaving behind 24 housemates. Selly from Ghana, Sierra Leone's Bassey, Biguesas and Neyl from Angola were the housemates who nominated LK4. While on stage, LK4 told IK that it was not about the money for him, for now its all about Koketso.

Meanwhile, they showed highlights of Koketso in one of the diary sessions when she noted that nothing will happen in the house and if it should, then it had to be outside the house.

The two are now outside the house officially with no cameras or other housemates interfering with their fun. They walked hand in hand as they left the house to go and explore each other. There will be nominations tomorrow.