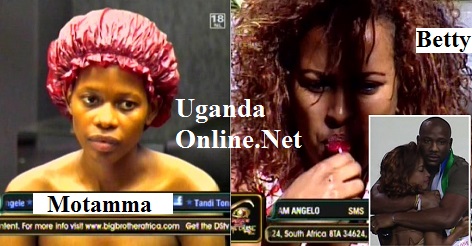 It's 63 days to know the winner of the Big Brother The CHASE, but more housemates continue to get off board leaving 20 in the chase for the prize money. Betty's fans were left wondering what is next after Africa decided to put an end to nocturnal games between their favourite 'housie' and Sierra Leone's Bolt.

Not all is lost though after Tanzania's Nando and Selly from Ghana are filling up that space. Betty was the first female housemate to have her cake sliced by Bolt from Sierra Leone (though her mom says, that was a camera trick done by haters), but effective tonight, Bolt will have to brace more cold nights before getting a replacement.

Oneal from Botswana followed with four country votes and Malawi's Natasha with three votes. Bolt, Elikem and Betty all got 1 vote, implying that those three are not that popular going by their scores, but tie-breaker rules came into play to determine the winner, and this is how Betty was evicted after it turned out that she had the lowest country vote percentage.

Curvy Motamma could not even get her country voting for her as the Botswana vote had gone to Oneal, which was a perfect move bearing in mind that, he came out the second with 4 country votes.