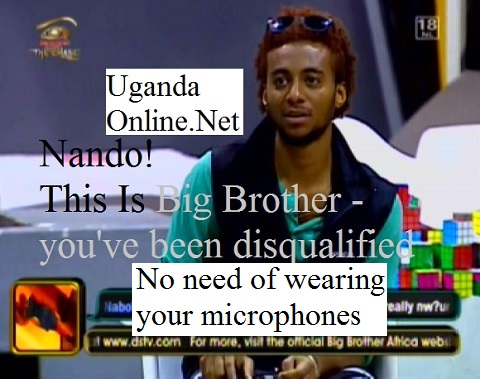 You all remember the housemate who travelled all the way from the US to audition for the reality show in Tanzania, that was none other than Nando (22) from Tanzania. He had hopes of building an empire, but all those dreams have been shattered following his Friday fight with Elikem.

Biggie is very clear when it comes to violence, in most cases, he shows you the exit. Once he was done with the eviction show and it was business as usual for the housemates, he summoned all of them to the lounge for a final review of the footage that eventually got Nando an early exit.

Nando was shown the footage in which he threatened to stab Elikem shouting on top of his voice with words like: "Elikem did not deserve to live." To make matters worse, Nando had a pair of scissors under his bed, now whatever that was doing right there can be for another day.

This kind of behaviour is completely unacceptable, "You have been disqualified from the Big Brother game," Biggie roared. Nando was evicted like a chicken thief, he was not allowed to go back to the house, he had to use the diary room to join Sulu and Annabel who had earlier left the Biggie's house.