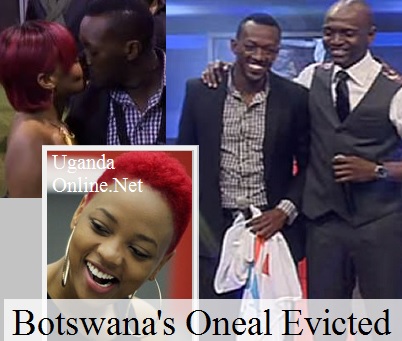 Last night Africa bid farewell to Botswana's Oneal who had done 10 weeks in the Big Brother The Chase house. He was the only housemate evicted last night as opposed to the previous weeks when at least two housemates had to be evicted. Oneal left behind his better half, Feza from Tanzania, the only housemate representing East Africa.

Three housemates were exposed to Africa after Elikem revealed to the rest of the housemates that Ethiopia's Bimp had joined Feza and Oneal among those up for eviction. This did not affect Bimp in anyway as he came out with 10 votes, 3 for Feza and only 2 for Oneal.

IK asked him how it felt being the only housemate evicted this week, he said: "I'm a special person." Feza could not stand the fact that she was going to spend the rest of the nights alone as she shed tears trying to get to terms that her lover boy was out of the house.

Feza was so disturbed about Oneal leaving the house to the point that she even forgot Elikem's name because that was the only thing that made sense to her. One of Feza's fans had this to say:

"Talk about natural beauty talk about about Feza Kessy... I love the way you admire your relationship with Oneal no matter what the people had said. Keep playing the game girl, Oneal is behind you. Do not get disappointed please. Let you character adorn what you have in the game as well as in your relationship."

Eight housemates are now left in the house, four male housemates that include South Africa's Angelo, Nigeria's Melvin, Ethiopia's Bimp and Ghana's Elikem. The Big Brother girls still in the house include: Nigeria's Beverly who is a top entertainer when it comes to the Big Brother game, Cleo from Zambia, Dilish from Namibia and the East African beauty, Feza!